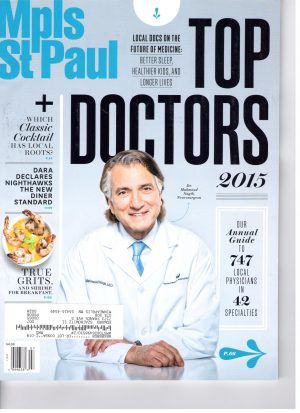 Dr. Szachowicz has again been nominated as one of the TOP DOCTORS in the state of Minnesota. Announced in the July 2015 issue of the Mpls-StPaul magazine, Dr. Szachowicz has been chosen from a survey of his peers. Selection was done from research surveys sent to 5,000 metro-area doctors and nurses. The question asked for nomination was ‘to whom would they go if they or a loved one were seeking medical care.‘

Only doctors who acquired the highest total points from the surveys, research, and blue-ribbon panel review were selected to be included in the 2015 Top Doctors list in the Mpls.StPaul’s magazine.

Our new location is in Minneapolis: